25 years, 6 months and 12 days,
the time that I have walked this earth

Time is a symbol

4 months and 22 days,
the time since I last saw my mother’s face

Time is at once both a healing and divisive thing

Time is mysterious and at the same time so purely simple

2 years and one month,
the time since my heart was last whole

Time moves on whether we can or not

2 day and 12 hours,
the time since I last cried

Time goes forward without us, despite us, beyond us

10 years, 2 months and 23 days,
the time since I last cried and did not feel ashamed

Time is slave to none and in the end, master of all

12 hours,
the time since I last told a lie

2 day and 16 hours,
the time since I last smiled

Time is a measure of our lives, and a reminder that it will end

Unknown,
the time since I last smiled and meant it

Time is everything and it is nothing

Time is a lie

“Every product we sell has a story. And it’s a true story.” I was particularly taken by these words, spoken by Fortnum & Mason’s resident archivist, Dr. Andrea  Tanner, as she told us about the terribly interesting and extensive history of the store that went from an exclusive little grocer to a giant name in the world of Tea (amongst other things that it is famous for). Standing on the same site since 1707, Fortnum & Mason (often shortened to just Fortnum’s) is an undeniable and integral part of Britain – in the words of Dr. Tanner, they’re “older than the United States”

The store started in 1707 as a grocer for a primarily exclusive clientele of royalty and aristocracy, specializing in scouring the globe for exotic spices and wines for the customers. Though the store is now open to everyone, they still have an amazing selection of products from the world over – with flavors and blends that are quite intriguing and inviting. From the very beginning they have strived to build a place that not only caters to the wishes of their customers by providing quality products, but also by nurturing special relationships built on give and take. In fact, some of their top-selling products, like the Chocolossus and Sir Nigel’s Marmalade, are made from recipes brought to them by their customers, asking them to make it for them. In all my years I’ve never heard of such a thing. How marvelous a concept! They are still held in very high regard by royalty though with Royal Warrants dating back some 150 years! 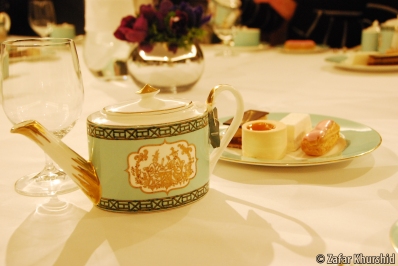 My fellow Study Ambassadors and I were treated to the Royal house blend – a mix of Darjeeling and Assam – while we listened to the storied history (pun very much intended ; p) of Fortnum’s, in the back room of the beautiful Diamond Jubilee Tea Salon on the Fourth Floor. Sitting around a wonderfully set table with beautiful Fortnum’s china, I must say I felt rather dignified and fancy (not something I’m used to living as a student eating a lot of take-out and drinking my Twining in a coffee mug). And to go along with our tea we had the most delectable cakes and pastries – my personal favorite being the custard filled Rose Eclair, so moist and light. Those of you looking for a nice place to spend an afternoon or have a demure celebration may want to consider booking a tea tasting here. They even have, what they like to call, Tea-ristas to help recommend some exotic teas and tell you the magnificent stories behind each tea leaf. 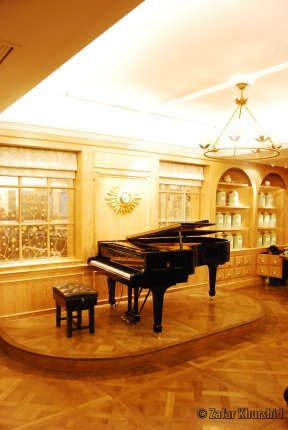 An original Menu from when the restaurant first opened!

A rather intersecting little fact – they have their own bee hives on the roof of the store that produce their exclusive honey, which is so popular that there’s a waiting list to get some. They’ve even got an online bee-cam that lets you watch the industrious Fortnum members at work. And each of the combs have entrances/doorways with architecturally correct designs in the Mughal, Chinese, Ionic and other styles. Leave it to Fortnum’s to put such a regal touch on what many others might consider simple animal (or insect) husbandry.

My favorite part of the entire store however is the Third Floor. At least 1/3rd of that floor is now on my “Must Have” list. I could literally spend all day admiring the magnificent leather and woodwork. From Whiskey flasks to beautiful chess sets; fashion accessories to a plethora of Fedoras (for which I have a personal weakness); I must admit that I had to try quite hard to keep from visibly drooling. One day I am going to furnish my private den to look pretty much exactly like that section of the store! 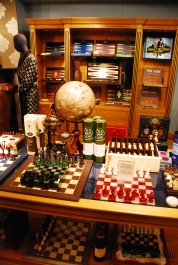 Chess Anyone? (I’m more inclined to the Malts myself)

In the words of Queen, I want it all!

But the store is not just what is housed within, but its home as well. It’s nice to see that despite renovations, refurbishment and extensions, the store retains many elements of its history, right down to the magnificent wooden stairs (with a characteristic creak and squeak) and its plush red carpet. There are wonderful pieces of art handing all over and even an exquisite mural of the Tuscan countryside on the Second Floor near the Perfume Bar. But don’t just look around, look up – there are magnificent chandeliers hanging everywhere and some wonderful paintings on the ceilings at certain points, a clever way to create the illusion of greater space, since each floor has a relatively low ceiling.

Well I hope I’ve given you a small taste of what Fortnum’s has to offer. I recommend that if you’re on Piccadilly you pop in and check out the amazing building and the wide selection of goods they have to offer. Even if you’re not nearby, make a short trip of it – buy yourself an exotic blend of tea or a special malt whiskey or a nice easter basket : )

Man, the Fortnum Bees have been hard at a work! 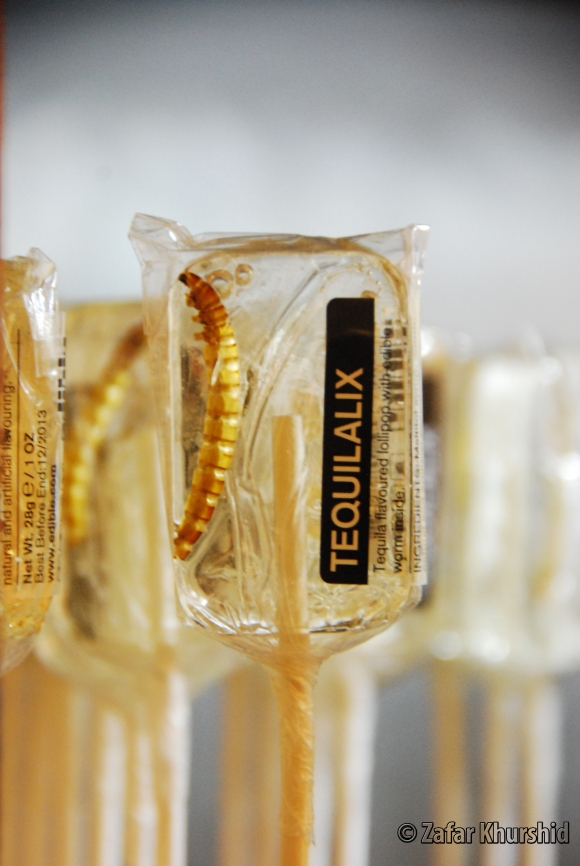 I wasn’t kidding when I said they had some exotic and enticing goods!

According to page 6 of today’s evening standard, a survey of Cineworld Unlimited customers revealed that the spagetti-eating scene from Disney’s classic “Lady and the Tramp” is Britain’s favorite screen kiss. This is rather surprising, while at the same time it isn’t (yes that sentence did actually make sense in my head!). The people surveyed are obviously adults, who probably watched this movie decades ago, but may have re-watched it since in bouts of nostalgia. So it seems as this particular demographic grew older, they started cherishing their old “awwww” moments over the, what seems like, mass produced market of rom-coms (Romantic Comedies). When I think about it, thats actually cute. I myself can remember watching childhood favorites, snuggled up with that special someone – well to be clear it was more me forcing them to watch movies which I held as staples of my childhood in an attempt to educate them to the fact that I WILL NEVER GROW UP! ;-p

The movie itself came out in 1955, which just sounds absurd right? I mean I’m sure so many of us watched it as kids, I know I did. So to think that it was such a popular staple of childhood cinema that someone from my generation watched it growing up, say somewhere between 1995-1999, 40 years after its release, is truly baffling, and at the same time heart-warming. But to tell you the truth, I find it hard to imagine that the same hold today. Children’s movies these days – like Finding Nemo, Kung-Fu Panda, Cars – are far more action-packed and fast paced. Are kids today still watching Lady and the Tramp, Ferngully, Dumbo or 101 Dalmatians? I’m going to guess no. Which is sad, because some of those original Disney flics are classics. That’s not to say that the new ones are great. How does the saying go? “Never forget where you come from”

Hmmmm… I find that I went way-off course as I wrote this entry. The original idea was to do a Top 10 Movie Kisses of my own, but I guess I got lost in the wonderful world of older days, when movies always had happy endings and gave you that fuzzy feeling inside. Well I suppose I’ll hold off on that one till tomorrow – Do it as a “V Day” post. Come back if you’re interested.

Oh No! Its Snowing!

I think this Gentleman has had a few too many…

Come to my Arms!

The most mesmerizing moments can happen when you least expect them. Last night I got caught in fairly heavy snowfall on the walk back home from my friend’s place (at 2 in the morning!) so I decided instead of cursing my luck to enjoy the beauty and have some fun with it. It truly was the most surreal feeling walking through the falling snow – something straight out of a movie! Walking through the empty streets as they snow danced all around me, catching fresh snow flakes on my tongue, making funny faces on people’s cars ; p

You probably see some everyday but rarely mind it. On the sides of bridges, on walls in vacant lots, beneath your very feet as you walk on the pavement. Graffiti really can be found anywhere and everywhere. Some consider it a symptom of the degeneration of society, as eyesores that debase the value of properties and are a sign that “the neighborhood just isn’t what it used to be”. Some see it as a means of expression, to rebel and shout out against a society that they feel misunderstands or mistreats them, used when the words that come from one’s throat just aren’t enough. Some even see in it a new art form, a way to show the world their talent and their skill.

END_OF_DOCUMENT_TOKEN_TO_BE_REPLACED

Every night when I go to sleep
There’s one thought,
In my mind it creeps
Every time I close my eyes,
Its a picture of you,
That I spy

I stare at a torn photograph,
And all I hear,
Is the sound of your laugh
My memories tear at the seams,
But its only you,
That’s in my dreams

Is I’ve missed you…